Part of our CEO Series of articles aimed at business people who need to know more about technology. 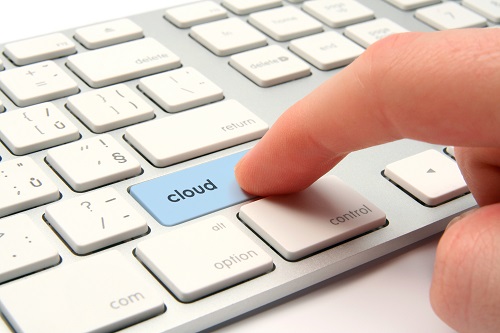 If you believe all of the hype then you should move your IT systems to the Cloud and give up on your own Data Centre. Is this really the right approach? What makes sense to move to the Cloud and what doesn't? In this article we look to answer these questions and aim to identify when the Cloud is your best solution and when you should be running it yourself.

In An Introduction to Cloud Computing we looked at Cloud technologies and some of the benefits and issues that exist with this technology. In A Brief History of the Data Centre we looked at the evolution of Data Centre technology over the last 30 years and introduced Converged Infrastructure. If you need more background on the topics discussed here then we recommend that you read these articles first.

In this article we will use the following terms:

Web-Scale
The IT approach taken by big Internet companies like Facebook and Google.
IaaS
Infrastructure-As-A-Service. A bare Cloud service consisting of a virtual machine that you run your systems on.
PaaS
Platform-As-A-Service. A service like a database or a web server that you rent from a Cloud Provider.
SaaS
Software-As-A-Service. A whole system provided by a an external vendor such as a Payroll system, a Customer Relationship Management system or an Accounting package.
Public Cloud
The real external cloud that you access over the internet.
Private Cloud
Your own internal version of the Cloud that you manage within your own Data Centre.
Hybrid Cloud
A combination of Public and Private Cloud.
Data Centre
Your own set of infrastructure that you manage (or have close control over).
Converged Infrastructure
Systems that combine storage, compute, memory and management capability into a single large capacity box that is cheaper to run than previous generations of Data Centre technology.
Hyper-Converged Infrastructure
Similar in concept to Converged Infrastructure except the systems are more highly integrated and tend to come in smaller sizes that can be added together as a cluster.

Web-scale emerged to solve a different set of problems from those that the traditional corporate IT world had been working on for many decades. 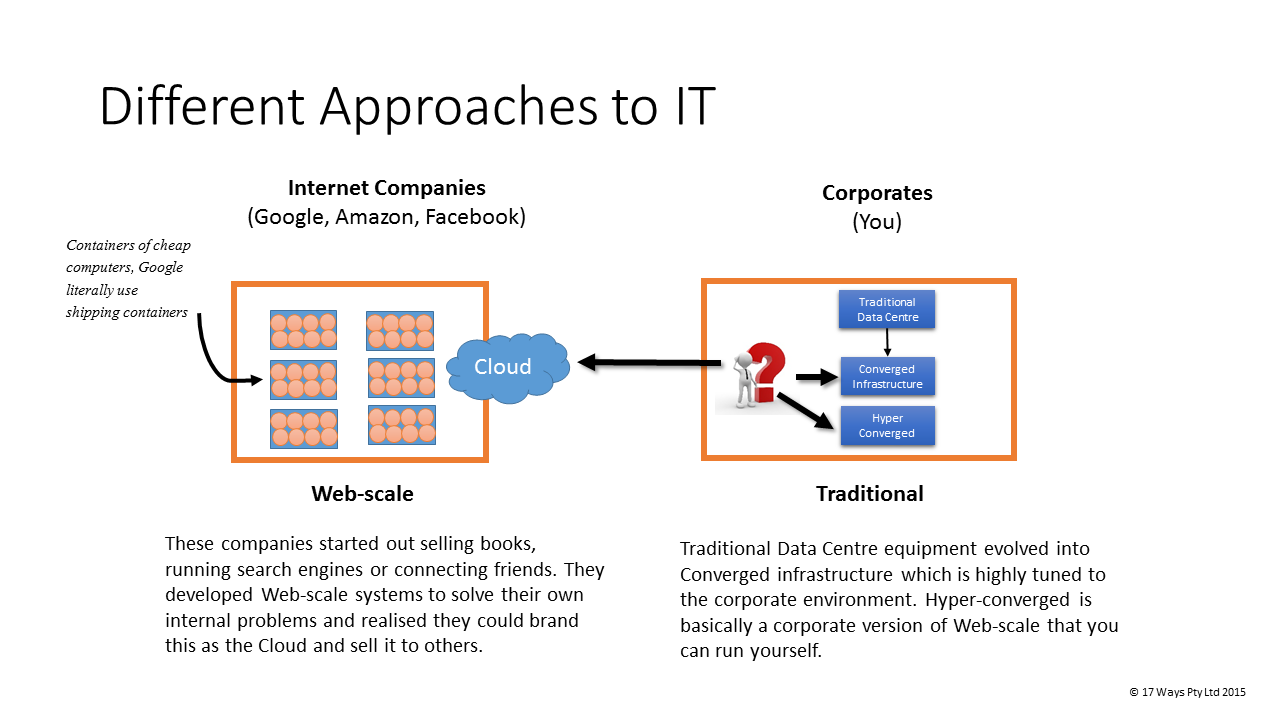 Web-scale was built to solve the problems that the Internet companies were facing with scale and resilience. They threw lots of cheap hardware at the problem and built some clever software over the top to manage it all. Opening this up to others to use is what we now term IaaS or often just "the Cloud". Corporate IT was solving a different set of problems and Converged Infrastructure has emerged to address this. Hyper-Converged is very similar but looks a lot more like Web-scale.

So completing our definitions we have:

Let's look at the different problems that Internet Companies and Corporates face. 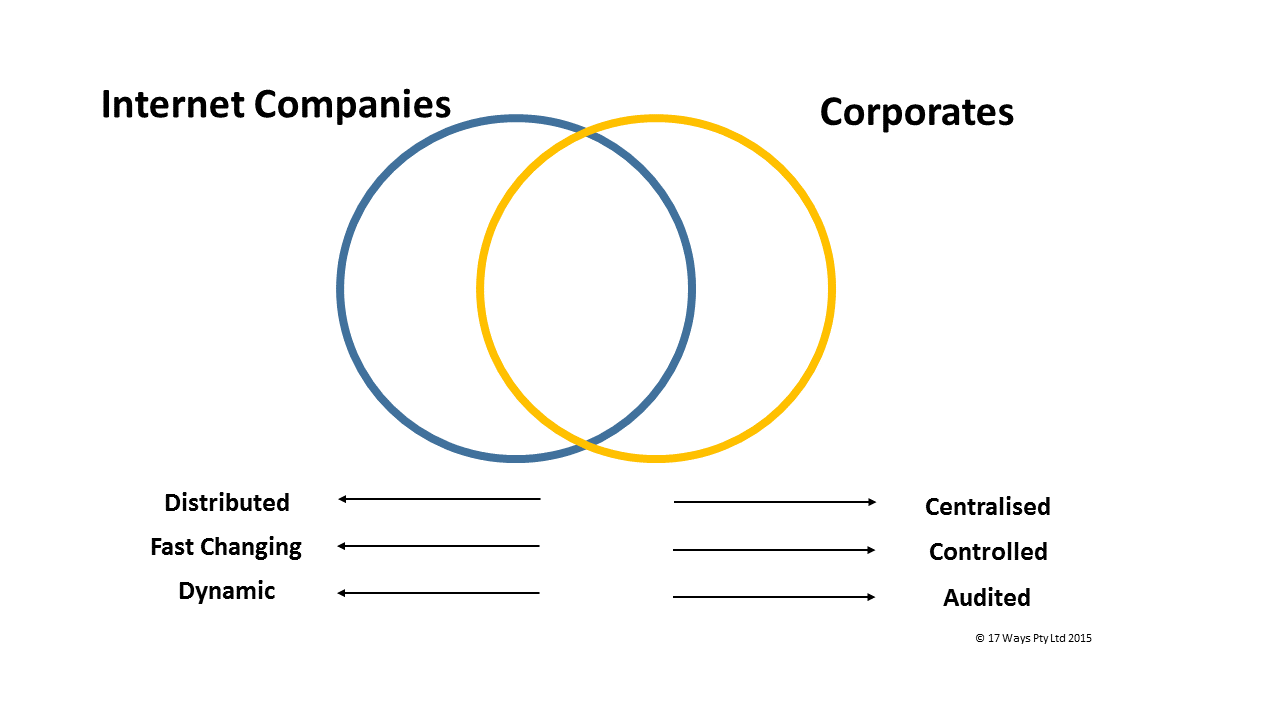 Despite the apparent differences, many of the approaches developed for Web-scale are equally applicable to corporates and in that sense Web-scale represents a disruptive and extremely healthy threat to the traditional models of corporate IT.

The secret to getting the most out of the new technology is to identify where it will work for you; i.e. the overlap in the picture above.

The easiest way to understand Cloud is to think of it as the coming together of two different things; the application of Web-scale approaches to traditional corporate IT problems. In other words, the Cloud represents the overlap in the picture above with the problems we are trying to solve coming from the traditional corporate IT world and the possible solutions coming from the Internet companies' world.

As we are fond of saying at 17 Ways - the Cloud is often a solution looking for a problem. Lets look at this from another angle and consider the drivers that are typically found in both environments.

Look down the two lists and tick which more closely matches the problem that you are trying to solve. Add up the totals and if the left column scores higher than the right then the Cloud is probably the right answer for you. If not, look again at the Traditional Data Centre approach.

The focus of many companies' Cloud strategy starts with the infrastructure. This is driven by a belief that by adopting the Cloud, costs will reduce, speed to market will increase and performance will become truly scalable. The problem with this is that infrastructure achieves none of these things. It is applications that will be the true deliverers of the Cloud benefits, infrastructure is merely the layer upon which your applications run. Its a bit like adopting a new guage of train tracks. Sure it might be a better size and easier to lay the rails but until you have some trains that will fit on it you are wasting your time.

Don't ask your Infrastructure teams about the Cloud. Ask your Development teams. If they can see a benefit then push forward.

The standardisation that the Cloud can bring to your deployments is of great value for new applications but for existing applications it is a huge problem. In the traditional Data Centre model the infrastructure provides an extremely flexible service for the applications. If an application needs a certain package installed, the infrastructure team install it, if it needs the database search to be case sensitive, then it gets it. In the Cloud model the application development teams are forced down a standardised path. Be very careful if you are presented with a TCO figure for your company's Cloud migration. It is very likely that this figure only includes infrastructure cost and excludes what can be massive additional cost for the Development teams.

The Cloud isn't a revolutionary technology like PCs or the Internet, it is a new way to do the same old thing. As an end user you can't really tell if you are using the Cloud or not and for that reason Cloud adoption should be driven by your application development teams, they are the ones who can see the benefits and weigh them against the risks.

As we covered in the article A Brief History of the Data Centre, the comparison between the Cloud and traditional Data Centre technologies is no longer applicable. Data Centre technology has moved on significantly in the past few years with the emergence of Converged and Hyper-Converged technology. If you set them up properly then these systems are significantly cheaper to run than previous technology and offer many of the benefits of the Cloud without the downside. We consider running your own converged technology to be a serious and often compelling alternative to mass adoption of the Cloud.

When to Use What - Our Recommendations 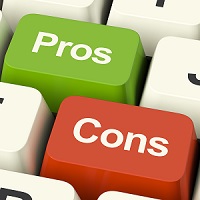 Ok, its a big table and it works the wrong way around (solution to problem rather than problem to solution) but we hope this can be a useful reference for you in any discussion around Cloud vs Converged (or Traditional) Data Centre use.

All new technologies with enough effort behind them eventually becomes great. The same will be true for the Cloud. Apple launched their first portable hand-help computer (the Apple Newton) in 1993. It was a disaster. However the concept was right and now the idea of NOT having a powerful computer in your pocket seems strange.

Cloud is a fantastic idea and it will ultimately dominate Corporate Technology, but let someone else go first to iron out the problems. It won't change the experience to the end user, there is no need to be an early adopter. Converged Infrastructure is here now. Use it.

There are plenty of examples of bad technology that has come good over time. The standout probably being Javascript which started as a terrible language suitable only for popping up annoying boxes on webpages but it is now central to all web development and has become a powerful and well supported language.

At 17 Ways we believe you should focus first on your requirements and especially on performance and availability. You need to look at the mandatory and optional requirements and before committing to a Cloud strategy you need to be sure that it is the right answer to the problems you are trying to solve. We believe that too many organisations are currently forcing a Cloud strategy onto systems that would run better, cheaper, faster and with less risk if they were deployed on Converged Infrastructure. We have seen many examples of organisations who have move workload to the Cloud and unfortunately have failed to realise the benefits that they expected in terms of cost, performance and availability.

The Cloud is a whole range of different technologies and we advocate Software-as-a-Service as being the best of these. If you can find a vendor who provides everything that you need and delivers it over the Internet then you should use them (but check out our list of things to consider).

Use Private Cloud now as your way to get ready for Public Cloud when others have resolved the issues. We recommend using Converged Infrastructure for your Private Cloud as it will flush out many of the issues that you need to face later such as organisational change within your IT support groups, recovery models and managing a variable workload.

Learn how it will work on the Public Cloud by practicing first on your own Converged Infrastructure.